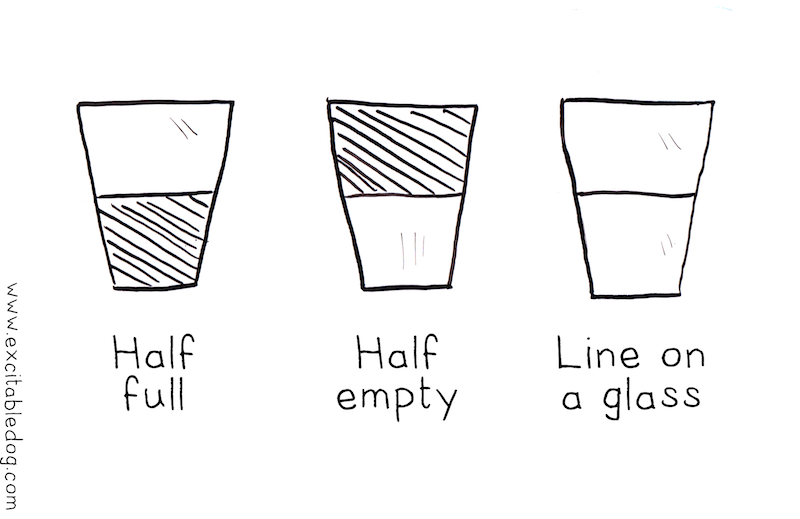 I’ve just finished reading Art and Fear: Observations on the Perils (and Rewards) of Artmaking by David Bayles and Ted Orland. I immediately bought a copy for a writer friend of mine.

It’s short and amusing and incredibly good at breaking through the angst of making art. I draw cartoons (over at Excitable Dog and for the odd birthday card) and write blog posts here. In these endeavours I have struggled with  typical artist stuff, including:

What is lovely about Art & Fear is that it describes all these insecurities, unpacks them a bit, and then says do art anyway. These fears and insecurities are inevitable, and you need to accept that and get on with it. It’s full of really useful reminders, such as this from the introduction:

“Art is made by ordinary people… It’s difficult to picture the Virgin Mary paining landscapes. Or Batman throwing pots.”

The book also makes some useful distinctions about different points in an artistic journey, during which certain skills are experimented with and then discarded while others are developed and perhaps even finally mastered. And these practical skills of using physical tools lead to a certain restriction in possibility but also a freedom of expression and a new level of artistic possibility.

In many many ways there are parallels to be drawn with life. As we go down roads in terms of relationships, career or lifestyle we close options elsewhere, but reap the rewards of those choices as well. For example, I have practised taekwondo on average twice a week for the past 10 years, sometimes more, sometimes less. That time and effort has led me to a point with my taekwondo ability that can’t be reached by shortcuts, but it’s also closed options in other areas that could have received that attention. For example, I can’t play a musical instrument. And I’ve lived in London, where I am surrounded by people and culture, but not mountains and sea.

The book also covers criticism and the world of art, including this useful way of thinking about art.

“Writer Henry James once proposed three questions you could productively put to an artist’s work. The first two were disarmingly straightforward: What was the artist trying to achieve? Did he/she succeed? The third’s a zinger: Was it worth doing?”

These questions have already helped me think about art I’m experiencing, but also art I’m producing.

Heartily recommended to anyone with any artistic angst that stops them from working on, or committing to, their art.