Ever since we came back from Canada, I’ve had a craving for a good stack of American pancakes, eaten out, for breakfast one weekend morning. This simple craving turned into a bit of a quest when I realised it’s not so easy to get pancakes around here. I posted a question on the SE1 website and got some suggestions to try out. At each venue I had pancakes (or the closest equivalent), freshly squeezed orange juice, and a cappuccino or latte. There was not huge variation in price – it was always under Â£10 for the lot. My biggest shock was the discovery that ‘pancakes’ doesn’t mean what I thought it did. I expect a short stack of 3 or 4 fairly small pancakes, about a centimetre thick each, served with maple syrup or other options. Apparently, there’s a different object, which is a single pancake, the size of a large plate, up to about 3 centimetres thick in the middle. So, here’s my review of the options. 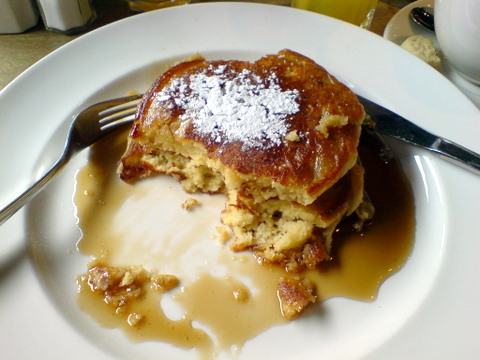 Next to Borough tube.

Probably the best of the bunch, with Cantina a close runner-up. Pancakes are pictured above. This has a nice diner feel to it and a clean, wooden decor. It’s not cheap, but is the cheapest of the places we found! Importantly, the pancakes tasted good, and were nearly what I was expecting from a stack of pancakes. I got two decent sized pancakes, with the right amount of maple syrup and some powdered sugar on top. Decent coffee and excellent orange juice.

This is a gastropub with a bit of attitude, and normally Sarah and I stay well clear. The pancakes were actually one large, thick pancake cut in four, which I still think is odd, but it was served with clotted cream and maple syrup, which worked well. The coffee was ok, and the orange juice was great.

The most disappointing of the places visited by far. I had high hopes because it’s a cafe in an architecture firm, and I was expecting to enjoy the venue and the food. The pancakes themselves were WAY too sweet for my taste and the venue is a bit soulless. The pancakes were actually one huge, thick pancake and toppings were already on the pancake and also too sweet. I had bacon, caramelised banana and maple syrup (all in one), and could only manage about a quarter of the pancake. Sarah had yoghurt with fruit and chocolate pieces. The yoghurt and fruit were sweetened and Sarah managed to eat half of it. Coffee was ok, and the orange juice tasted like it had been sitting there a while.

I think it’s Cantina, or it’s one of the other posh restaurants down that same stretch of river… anyway. They don’t actually do pancakes, but do amazing, I mean amazing, hotcakes. They are served with maple syrup and just perfect in every way. The coffee and juice were good, too. The only downside was that it’s a but posh for us, but they served us and were very nice about it, too. Get there early because they stop doing breakfast at about 11.30 so they can make way for the lunch crowd.

Of those suggested, I dismissed Creme de la Crepe on Green Dragon Court by Borough Market because I was after pancakes for this research (but it sounds good for other purposes) and Giraffe, because it’s a bit of a trek from my flat and doesn’t sound nice enough to bother making the journey.

I still want to check out Tinseltown in St John St, EC1, but I need to lose some weight first. The research has taken quite a toll on my waistline!